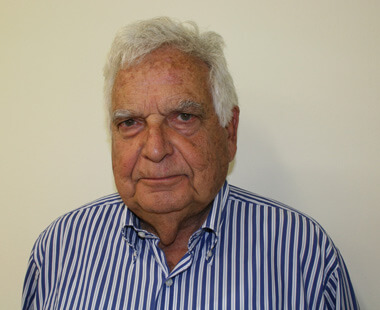 Born in Athens in 1932, Ioannis completed his studies in Hydraulic Engineering at the Polytechnic Academy of the University of Rome from 1954 to 1960 and went on to complete further studies in France as a French government hydraulics scholar from 1964 to 1965. Ioannis holds a Class C degree in Hydraulic Works and Surveying Project Studies. He is the manager and official representative of ETME Peppas & Associates E.E. Ioannis has experience in coordinating and leading studies on a number of hydraulic works projects, such as improving the water supply to Athens from Lake Yliki , managing water resources from the basins of the Kifisos River and Lakes Yliki and Paralimni, and the water supply works for the greater Volos area. He has served in various consulting roles on several projects, such as water supply works for the Olympic Games projects, flood protection and prevention projects, and drafting cost estimates. In addition, as a result of his pursuit of projects that are financed by the Council of Europe Social Development Fund, he has knowledge of national and EU frameworks for state projects. Ioannis has very good knowledge of French and Italian

Arrange a Consultation with ETME

You can find out more about which cookies we are using or switch them off in settings.

This website uses cookies so that we can provide you with the best user experience possible. Cookie information is stored in your browser and performs functions such as recognising you when you return to our website and helping our team to understand which sections of the website you find most interesting and useful.

Strictly Necessary Cookie should be enabled at all times so that we can save your preferences for cookie settings.

If you disable this cookie, we will not be able to save your preferences. This means that every time you visit this website you will need to enable or disable cookies again.

This website uses Google Analytics to collect anonymous information such as the number of visitors to the site, and the most popular pages.

Please enable Strictly Necessary Cookies first so that we can save your preferences!